Researchers in the U.S. have produced molecular dynamic simulations of the Spike protein found on severe acute respiratory syndrome coronavirus 2 (SARS-CoV-2) and its interaction with the host cell receptor angiotensin-converting enzyme 2 (ACE2).

Researchers in the U.S. have produced molecular dynamic simulations of the Spike protein found on severe acute respiratory syndrome coronavirus 2 (SARS-CoV-2) and its interaction with the host cell receptor angiotensin-converting enzyme 2 (ACE2).

The spike glycoprotein is a significant surface structure that SARS-CoV-2 uses to bind host ACE2 glycoprotein and enter cells.

The simulations enabled the characterization of a recombinant Spike immunogen and its interaction with a soluble version of human ACE2.

The results highlighted the crucial role that glycosylation plays in mediating this receptor binding and revealed natural variants influencing ACE2 glycosylation that could help inform the design of immunogenic agents or other therapeutic approaches to preventing infection.

A pre-print version of the paper is available in the server bioRxiv*, while the article undergoes peer review.

The Spike protein and ACE2 in drug design

Like many viruses (including SARS-CoV-1, which caused the 2002 SARS outbreak), SARS-CoV-2 uses a Spike glycoprotein to bind ACE2 and enter host cells.

Given this important role in viral entry, spike proteins are often used as immunogens in vaccines to induce antibody neutralization and as targets for the development of drugs that might inhibit host cell receptor binding.

Similarly, wild-type or catalytically manipulated ACE2 has been tested for its therapeutic potential as a biologic that could disrupt the infectivity of coronaviruses.

"Thus, a detailed understanding of SARS-CoV-2 Spike binding to ACE2 is critical for elucidating mechanisms of viral binding and entry, as well as for undertaking the rational design of effective therapeutics," write Lance Wells (University of Georgia) and colleagues.

Several single-nucleotide polymorphisms (SNPs) have been identified in the human ACE2 gene that could potentially alter ACE2 glycosylation and/or the receptor's affinity for the Spike glycoprotein.

"The proposed use of soluble extracellular domains of ACE2 as a decoy, competitive inhibitors for SARS-CoV-2 infection emphasizes the critical need for understanding the glycosylation profile of ACE2 so that optimally active biologics can be produced," write the researchers.

Now, Wells and colleagues have used glycomics-informed glycoproteomics to characterize site-specific glycosylation for a recombinant Spike immunogen and a soluble version of human ACE2.

Using experimental-based evidence, they then assigned distinct sets of glycans to specific glycosylation sites on the two glycoproteins. 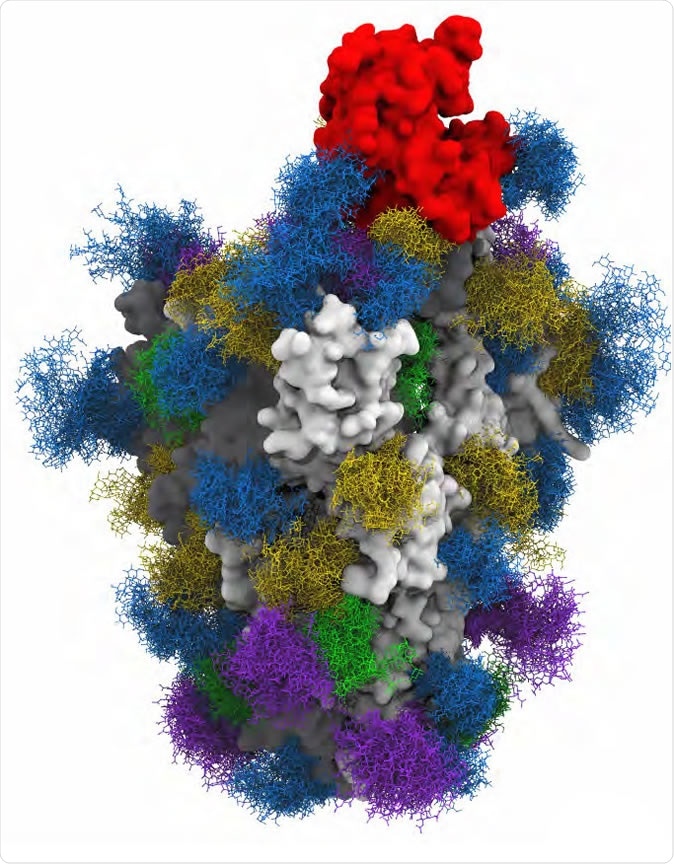 Variations in the interactions between Spike and glycans

The researchers observed glycan-mediated interactions between Spike and glycans at sites N090, N322, and N546 on ACE2, suggesting that variations in the occupancy or processing of glycans at these sites may affect the SARS-CoV-2 – ACE2 interaction and viral infectivity.

Wells and colleagues say it is well known that that glycosylation states vary depending on age, underlying disease, and ethnicity and differences in glycosylation may play a role in people's susceptibility to infection.

"These sequon variants will also be important to examine in terms of glycan shielding that could influence immunogenicity and efficacy of neutralizing antibodies, as well as interactions with the host cell receptor ACE2," writes the team.

Manipulation of this glycosylation could pave the way for improved biologics

The researchers say understanding the effects that ACE2 variants have on glycosylation, and spike binding should be prioritized, given the attempts that are being made to develop ACE2 as a decoy inhibitor of SARS-CoV-2 binding. Careful manipulation of this glycosylation could pave the way for improved biologics that are better at competing for Spike binding.

Although the findings provide a framework for guiding the design of immunogens, vaccines, and inhibitors, the authors say considerable work is still needed to fully elucidate the role glycans play in SARS-CoV-2 infection and disease progression.

"Detailed analyses of the impact of emerging variants in S [Spike] and natural and designed-for-biologics variants of ACE2 on glycosylation and binding properties are important next steps for developing therapeutics," they say.

"Finally, it will be important to monitor the slow evolution of the virus to determine if existing sites of glycosylation are lost, or new sites emerge with selective pressure that might alter the efficacy of vaccines, neutralizing antibodies, or inhibitors," concludes the team.

bioRxiv publishes preliminary scientific reports that are not peer-reviewed and, therefore, should not be regarded as conclusive, guide clinical practice/health-related behavior, or treated as established information